For my first experiment of 2013 I wanted to see if it would help to winterize my home.  I decided to do this when I received a large heating bill for January 2013 and decided to see if I could do anything small to reduce my heating costs. For some background I live in Chicago in a building that was built in the very late 1800s and have a natural gas central heating unit with a thermostat located literally in the middle of my place.  The table below details information from my gas provider. 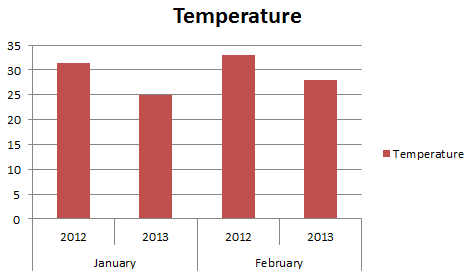 What else can we see about this data?  The therms that are used each month seem to for the most part relate to the external temperature of the air.  This does make sense as the colder it is outside the more heat is lost through windows and drafts and therefore the more energy it takes to heat the same volume of air to the same temperature.  An interesting deviation from this correlation is that February 2012 was warmer than January 2012 yet more therms were used in February than in January however this is only a very minor increase. 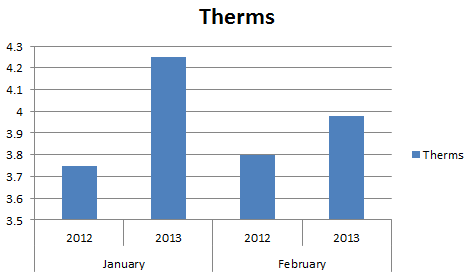 When I received my large heating bill of 4.25 therms in January of this year I took action.  On a particularly cold winter day I realized that there was a significant draft coming from the window near my desk.  So clearly I was losing heat from indoors from that.  I also had no weatherstripping on my front or back door.  I took two action items from these discoveries.  First, I purchased some cheap D-style weatherstripping to add to my door jams.  Next, and perhaps the most important and easily noticeable, was to seal up my windows the best I could.  In the summer when I add in my window box A/C units I seal the edges with duct tape which is specially designed to hold up to weather and moisture while being easily removable without issue.

These two items cost a combined $15.  So, is it realistic for me to save that much on one month of heating?  Probably not, and given that it typically gets warmer in March and continues to build in temperature in April I’ll realistically be using less and less therms.  However, I still have March and April of heating months at a minimum, so would it be realistic to save $15 from three months worth of heating costs?  I think so.  The math agrees with me.  February I saved about $11 on my heating costs.  I’ve nearly paid off my supplies for weatherproofing my home.

This will undoubtedly continue to pay in dividends for the next few months. Therefore next year if I winterize by sealing my windows at the beginning of winter (the weatherstripping will stay on the doors so I won’t need to purchase new every year) I could save at least $50 each year in heating costs.  That may not seem like much but if you combine these savings with other saving and you’ve really got something.  Not to mention it reduces your usage of nonrenewable fossil fuels. So, does winterizing your home affect your utility bills?  Absolutely.