Each year I focus on one area of spending in order to hyper-analyze it at the end of one year.  In 2013 I decided to focus on my spending habits as they relate to dining.  I define dining as eating out at a restaurant or going somewhere to get food that I did not make in order to eat a meal.  Dining does not include going to the grocery store (those are defined as grocery) and also does not include eating not at an establishment (i.e. eating at a friends’ apartment.)  By breaking out my spending by meal type I can then identify, if I am over budget for dining, where I might need to cut back to meet my spending goal for the month.  It should be noted that I don’t have a line item budget for each of these categories.  All spending comes out of my “Dining” line item and I don’t establish budgets for each meal type. 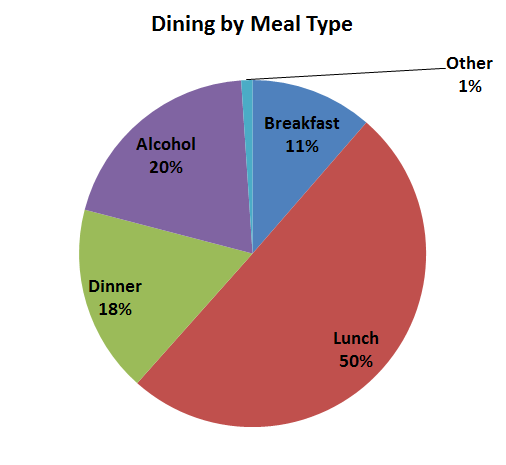 The alcohol category is an interesting one because it encompasses every one of these other categories as it’s own.  Any time I have a beer with lunch or dinner that amount of my check does not go toward the lunch or dinner category, it goes to the alcohol category.  It might also seem a little excessive to have my second largest spending category of dining being alcohol.  While you know the percentages you don’t know the scale, so if I was only dealing with $100 then while it looks like a lot really I would have only spend about $20 in the past year on alcohol.  But also consider this: the beer or mixed drinks that I drink are premium, therefore they cost more than the average $5 beer for a macrobrew.  Yes, that’s right, I’m one of those people who enjoys a delicious microbrew, and if possible, a regional microbrew, the more hyperlocal the better.

The last note I’ll make about this graph is “Other” which represents something I just can’t categorize into a meal type.  For example, let’s say I go to a movie at 10:30pm and when it let’s out at midnight, I stop at a taco stand or at the gelato shop for a snack.  It’s technically not any defined category, and as you can see, I don’t do that often enough to create a category for snacks.

I liked this activity and it doesn’t take much effort for me to define my meals like this so I will continue to do this breakdown.  Ideally, now that I have this information, the next step is to reduce my spending at lunch in order to spend less in general.  What’s next?  For 2014 I’ve decided to track my spending by food group for groceries.  I’ve broken these into the following categories: Fruits, Vegetables, Meats, Breads and Grains, Dairy and Cheeses, and other. Expect that report in early 2015.