In just a few days the two-day adventure that is the #DSN50 NASA Social event in sunny California will begin.  This post is to help everybody follow along during the event.  Throughout the next two days expect an explosion of posts from me among the various social media accounts I have.  However, as these things go, I simply won’t be able to post every single detail, or, I might not post something I don’t find as interesting as another topic or fact that we talk about during the event.  So this post will also help by showing how to follow everyone who will be posting during the event.

I will be posting primarily on Facebook and Twitter as these are my primary social media networks.  I’ll also try to post to Google+ from time to time and Pinterest.  The posts I make to Facebook, Google+, and Pinterest will be mostly photos with a little context.  Posts to Twitter will primarily be facts, comments, or quotes and may or may not have photos associated with them.  Whenever possible I’ll also tag locations to these posts.  All posts will be tagged with the #dsn50 and #NASASocial hashtags.  If I find a decent opportunity I’ll also post short videos to Vine.  All of these accounts are linked to the right of this post.

I’ll be posting a summary of the day on this blog at the end of each day.  If I get into a more detailed topic thought the day and have time to fire off a quick blog post on here, I’ll try to do it.  I’ll also be posting to the Facebook photo album at the end of each day.  I know that people who aren’t on Facebook will want to see these, but I’m afraid I’m not too fond of photo sites so I really don’t use them.  Facebook albums are what I’ve always used and I’m in a routine when it comes to trips on how I distribute my photos.

If you wish to follow the group of us throughout the event I’d recommend following the following accounts, lists, and hashtags.  I don’t have accounts with some of these networks but I know others find them popular and will be posting to them as well.

Certain parts of the event will be streamed live online.  NASA JPL operates two UStream accounts.  These are NASAJPL and NASAJPL2.  Check the schedules for these to find out when and which account will carry the #DSN50 broadcast.  If I get notification I’ll try to let everyone know beforehand the account and schedule.

I sure hope everyone enjoys following along as I partake in this amazing adventure I am about to start.  I certainly know I’ll be over the moon with excitement for the entire event and can’t wait to share everything I see and learn with all of you.

The Deep Space Network (DSN) is a collection of radio antennas which allows NASA, and their partners, to communicate with the various satellites, probes, and rovers on other worlds and in the vast expanse of space.  NASA JPL operates antennas at three locations around the world, however the DSN is in more locations and other partners operate other locations. 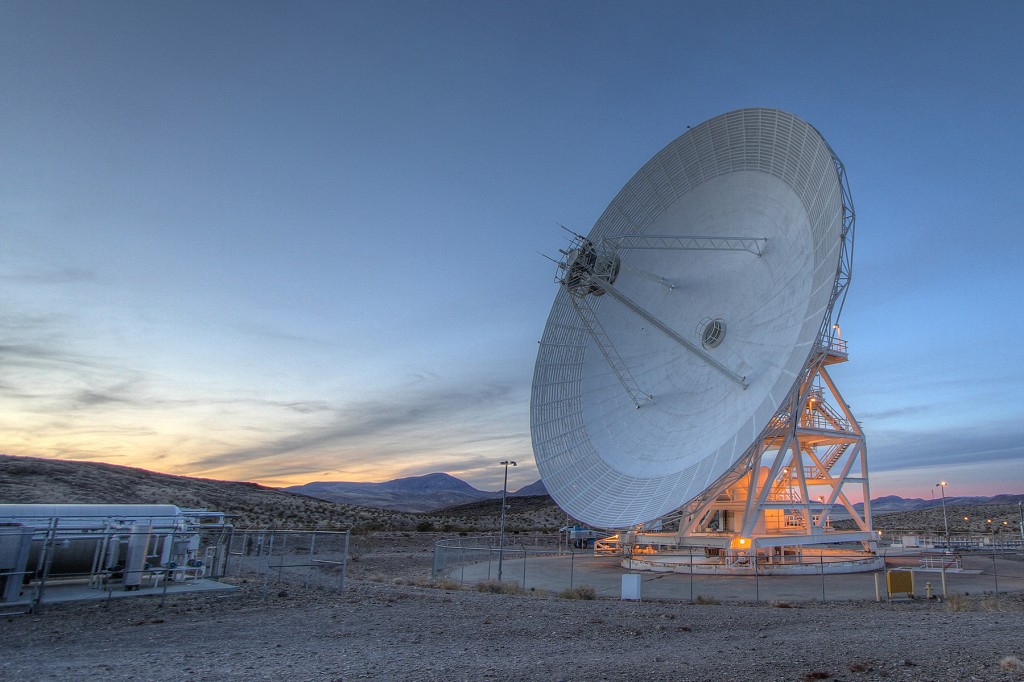 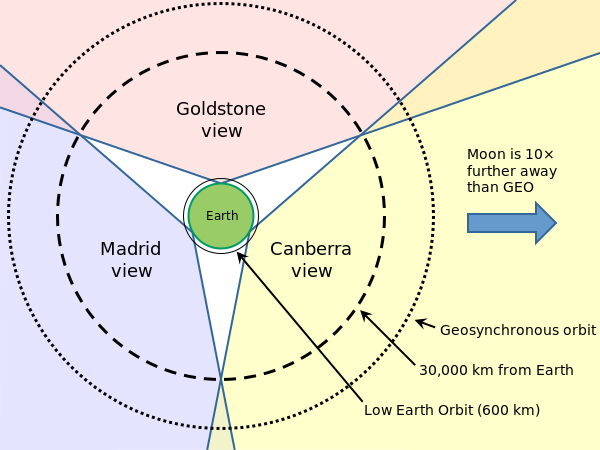 So why is this important?  Because once we launch an object into space we need a way to send it new orders so it can keep working.  We don’t have a way to program a rover for every possible outcome because we’re sending a rover to learn about what we don’t know about yet!  Voyager 1 & 2, for example, are further away than any other man-made object in space.  How far, exactly?  Well, there’s a nifty site that NASA runs which gives up-to-the-second updates about the position of each of these probes relative to Earth.  At the time of this writing Voyager 1 was a little over 19 billion kilometers from Earth and Voyager 2 was about 15.6 billion kilometers from Earth.  That’s really really far away.

With numbers this big it’s hard to imagine that distance, so let’s demonstrate it a different way.  When you listen to the radio in your car, there’s a delay.  If you were to be sitting in the ballpark watching a baseball game and listening to the game on the radio, you’d hear the announcer at the game before you heard the announcer on the radio (let’s ignore the mandated FCC bleep delay for this example).  That delay is the time it takes the radio signal to travel from the transmitter to your receiver going the speed of light.  The delay only increases as you get further and further away from Earth.  A popular example is it takes about 15 minutes to get a signal from Mars.  That’s one direction.  It’s about 30 minutes for a conversation to happen.  Ready for the big numbers, mind-boggling part?  Voyager 1, at over 19 billion kilometers away, takes 17 hours, one way, to receive a signal.  That’s a signal that’s still traveling at the speed of light.

Let’s stick with the car radio analogy because it works well to demonstrate the importance and power of the DSN.  You’re in your car, listening to the radio, while on a road trip to another state that’s hundreds of miles away from your home town.  Eventually the station you have tuned in your car radio to will start to fade.  The signal from the transmitter is only so powerful and when you get near the ends of the radius you start to lose quality.  Maybe you don’t catch every word of a song or broadcast.  Keep driving and you lose it completely.  The exact same thing happens in space.  The DSN has to be powerful enough to be able to blast these signals hundreds of thousands, millions, even billions, of kilometers away from Earth and have our assets pick them up.  Therefore the DSN has to send out an extremely strong signal.  But our probes don’t have the ability to send out these super strong signals back, so how do we get information sent back?  The DSN has to be able to listen for incredibly faint signals and amplify them.

The NASA Social for DSN50 celebrates 50 strong and amazing years of talking to space assets using this network positioned around the world.  On April 2nd I’ll be touring one of these locations, the one in Goldstone, CA, and will learn so much more about how this network works and the future of the DSN for many years to come.  Interested in learning more about what the DSN is doing right now?  NASA has a cool site where you can watch what antennas are talking to what space assets at this very moment.  Check it out, it’s really cool!

Several times a year NASA puts on events called NASA Socials.  These events are designed for regular people to experience what it’s like to actually be a part of the NASA lifestyle.  In exchange for VIP access to areas normally not seen during a public tour, attendees are given pseudo press credentials and are encouraged to share what they see, hear, experience, and learn to their audience on various social media platforms.  This allows more people to see what NASA is doing in space.

These NASA Socials are open to anyone (although you have to be over 18 years of age and some are in restricted buildings that require individuals to be US Citizens) who operates one or more social media accounts.  Individuals simply add their name to the list and NASA picks the people who get to go.  In the past I’ve entered into these and have never made the cut.  So imagine my surprise when, after entering for the upcoming #DSN50 NASA Social mid-February, I received a notification saying I had been selected and was placed on the waitlist in the event a spot opened up.

See, while I think many people would jump at the opportunity to do this, the fact of the matter is it’s hard to take off with short notice from work and NASA doesn’t subsidize the costs any: participants have to pay for their own transportation to/from the airport and to/from the various locations of the NASA Social, airfare/bus fare/train fare from where they live to where the event is being held, and lodging during the event.  So the fact of the matter is things in life come up and sometimes when your name is called you simply aren’t able to attend, which is why NASA selects alternates.

While I was honored to be placed on the waitlist, I wasn’t holding out hope that anything would come of this.  I knew that I was getting closer and if I kept trying, eventually I’d be picked.  My world completely changed, however, when on Wednesday, March 12th, 2014, I received an email from NASA telling me I was being taken off the waitlist and I now had a spot on the #DSN50 NASA Social.  I had been selected to go to the #DSN50 NASA Social!

I immediately checked my work calendar and sent in a request for time off.  I researched my various flight, hotel, and rental car options, so that when my vacation was approved I would immediately be able to confirm to NASA that I was attending and would be able to book my flight, hotel, and rental car.  The past few days have been surreal with planning.  During the event I’ll obviously be posting lots of stuff on all of the social media networks I belong to, but if you’re into more detailed information make sure to check back here.  I’ll be posting several times as things are finalized as well as during the NASA Social event.  If you’re interested in following along with me and the others in attendance make sure to follow the following hashtags everywhere they are supported: #DSN50 and #NASASocial.  We will all be posting information, videos and pictures with those hashtags.